Please send us your files,  so that we can quote your exact part. We accept PDF and CAD files, but DXF or DWG files are strongly preferred in order to provide you with the fastest service possible. Contact one of our specialists today! 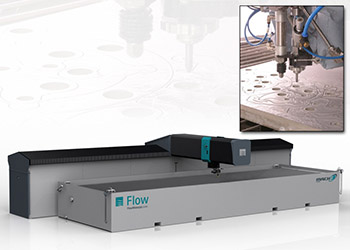 In the 1950s, Dr. Norman Franz, a forestry engineer, attempted to use highly pressurized water to achieve a more efficient method for cutting lumber. He created high pressure by dropping heavy weights onto columns of water, and then proceeded to force the pressurized water through a tiny orifice. While his experiments showed that highly pressurized water could enable the cutting of wood and other materials, they did not result in a commercial product. Dr. Norman Franz could not overcome the obstacle of maintaining high pressure over extended lengths of time.

It was not until the 1970s that technology developments enabled the introduction of the first commercial waterjet machines. These early machines were able to cut through a wide range of soft materials, including cardboard, food and foam rubber. There have been many improvements to this technology over the last few decades, but the basic mechanics are still in use today. Today, this process is referred to as “pure waterjet”. First, a pump pressurizes the water. Next, high pressure plumbing delivers the water to the cutting head and through a very small diamond or sapphire orifice, changing the pressure to velocity. At approximately 40,000 psi, the resulting stream that passes out of the orifice is traveling at Mach 2. And at 60,000 psi, the resulting stream is over Mach 3[i]. This supersonic stream creates the erosion force that cuts the material. 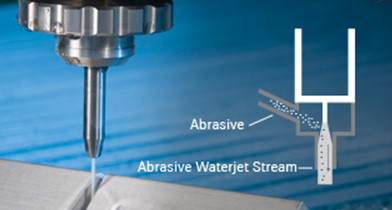 Then, in 1979, Dr. Mohamed Hashish discovered a way to add abrasives, such as garnet, to the waterjet cutting process. The powerful waterjet stream accelerates the abrasive particles and those particles, not the water, cut the material. The abrasive waterjet is hundreds, if not thousands of times more powerful than a pure waterjet[ii]. It vastly expands the types of materials that can be cut. Abrasive waterjets can cut through hard materials, including stone, ceramic, stainless steel, and other metals. Flow International introduced the first commercial abrasive waterjet machine to the market in 1983.

Many of today’s waterjet machines include both pure and abrasive waterjet capabilities. Abrasive waterjet functionality is required for cutting stainless steel. In addition to the functionality described above to create high velocity particles capable of cutting through stainless steel, today’s machines also include plumbing that enables freedom of movement to the cutting nozzle. The cutting nozzle is typically integrated into motion equipment, which allows for complex geometric shapes and designs to be cut. Also, typically PCs or CNC controllers are used along with CAD/CAM software to translate dimension requirements into a digitally programmed path for the cutting head to follow.

Dynamic Waterjet® machines are an excellent choice for cutting stainless steel plate and sheet due to the fact that they use a cold cutting process and put very minimal pressure on the cutting material. Still, before selecting this method, it is important to consider many factors, including cost, tolerance requirements, material size and thickness, desired edge quality, lead time, and also any additional processing that will occur after the cutting step.

There may be situations in which an alternative cutting method better meets a customer’s objectives for such parameters as cost, tolerance, or edge finish, but there are no major limitations with the process itself.

In order to accurately determine the true cost of cutting when comparing processing options, it is important to consider the following:

Also, in order to save costs, it may be beneficial for customers to consider additional processing that Penn Stainless can provide beyond cut-to-size processing. Depending on the precision level needed, Dynamic Waterjet processing at Penn Stainless may offer a cost efficient alternative to other high end methods available in machine shops.

The differences between standard or abrasive Waterjet cutting and Dynamic Waterjet® Cutting are visible to the eye. 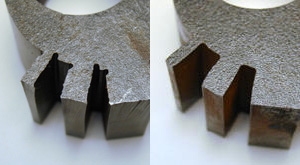 Standard abrasive waterjet cutting leaves a noticeable taper and corner “wash outs” on the underside of the cut piece, which creates the need for secondary operations. With Dynamic Waterjet Cutting, the piece is ready to use, saving valuable time and money. It is important to note that taper and stream lag can be minimized on all waterjet machines when machines are run at slow enough rates. Thus, the big advantage of Dynamic Waterjet is that it is able to cut virtually taper-free parts with improved tolerance, 25%-400% faster than a standard waterjet, depending on the application. In the past, waterjet users ran their machines at slower speeds to achieve acceptable tolerance levels and minimize taper. Other shops used different cutting methods such as laser, EDM, and CNC machining. Thus, by utilizing Dynamic Waterjet technology, Penn Stainless Products offers the ability to provide better cuts and tighter tolerances at competitive rates. As compared to conventional waterjet, Dynamic Waterjet provides the following benefits when run at production speeds.