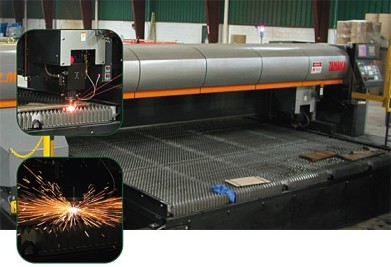 Plate-laser Cutting machines, which are designed to be large and powerful, are optimized to provide a cutting solution for larger and/or thicker work pieces.  Plate-lasers and are usually characterized by extremely large material working areas and high wattage resonators commonly in excess of 3.0 kW (3,000 watts).  They are able to cut through stainless steel plate up to 1.25” thick.  This enables customers to get the high quality and cost benefits of laser cutting for much thicker stainless steel plate than would be possible with sheet-lasers. Furthermore, plate-laser cutting is an excellent solution for cutting large size stainless steel sheet and plate, including sizes that are outside the range of waterjet cutting capabilities.

Plate-laser cutting machines are able to deliver high quality cuts across large plate sizes by delivering a consistent beam length that provides the same amount of power to all points on a work piece.  There are various ways to do this.  Penn Stainless Products utilizes a traveling resonator that moves with the cutting head assembly.  The traveling resonator delivers a consistent beam length by keeping the origin of the laser beam approximately the same distance from the cutting material at all times during the cutting process.

Material Costs  When comparing material costs between cutting processes, it is important to consider 1) extra material that may need to be machined off in a secondary process, and 2) scrap losses as a result of the cutting process.

Extra Cost in Later Processing Steps It is always important to consider if the cutting method will lead to additional processing costs as compared to other cutting processes. Here are some important considerations:

History and Development of Laser Cutting

History of Laser Cutting Machines for Cutting Stainless Steel Plate and Sheet
While there are many different types of lasers in existence today, the general principals used to create laser beams for all lasers evolved from theories first proposed by Albert Einstein in 1917. Albert Einstein wrote equations to back up his theories at that time, but did not develop his proposals further.  It was not until the 1940’s and 1950’s that various scientists began doing extensive work to create a practical device based on Einstein’s principals.  The first working lasers were introduced in the early 1960s.  Notable scientists that contributed to the field include Theodore Maimam, Arthur L. Schawlow, and Charles H. Townes. While the very first lasers were described by some as “a solution looking for a problem”, countless uses were quickly discovered for a wide range of applications, including medical, scientific, military, medical and commercial.  Many different types of lasers were developed in order to achieve this.  Laser types, which are typically classified by the medium that they use to create the laser beam, include Solid State, Gas, Dye, Excimer and Semiconductor.

The C02 laser, which is classified as a gas laser, is the standard laser technology used for cutting stainless steel plate and sheet.  It can also be used to cut other metals and materials, as well as other applications, such as welding and laser surgery.  The C02 laser was invented in 1964 by Kumar Patel.

Today’s industrial laser cutting machines typically include a C02 resonator, a beam delivery system, and a cutting assembly.  The resonator generates continuous single wavelength light emission by running electricity through a gas tube under appropriate artificial conditions.  This light is sent through a beam delivery system, which includes a series of reflective and partially reflective surfaces.  The beam is then delivered to a focusing lens, which brings the unfocused, larger diameter beam into a focused beam capable of cutting through stainless steel plate and sheet, as well as other materials.  This beam of light is very different from the low intensity light emitted from a standard light bulb that includes a mix of wavelengths and frequencies, and that is neither focused nor coherent.

C02 Laser cutting machines generate light in the infrared range and are extremely powerful.  They rely on the coherency of the directed laser beam to transfer power to the stainless steel plate or sheet work piece accurately. Laser cutting does not usually involve any mechanical contact with the surface of the material.  As soon as the light beam contacts the work piece, it heats the material such that it begins to melt and vaporize. Once the beam completely penetrates the part, the cutting process begins.   The melted material is than forced out of the cut area with a blast of gas.

While early laser cutting machines had the power capability to cut through stainless steel plate and other stainless steel materials, they struggled with inconsistent beam delivery, excessive heat in the cut material, and other limitations.  Many advances have been made over time to resolve these issues, including advances in the motion system to move the cutting head assembly over the laser cutting machine bed, improved processes to pierce the cutting material prior to cutting, and the addition of computer control software to direct the output of the laser beam.