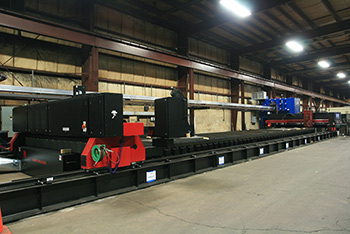 History and Development of Plasma Cutting

Plasma cutting is based on the technology used for plasma arc welding, which was developed during the 1940’s to provide a more efficient way of joining together metals for the war effort. Plasma, commonly described as the fourth state of matter, is electrically conductive, and composed of ions and free electrons in roughly equal proportions.

The plasma welding process uses this plasma to transfer an electric arc to a work piece.  The metals to be welded are melted by the intense heat of the arc and are fused together. In the 1950’s, scientists discovered that by reducing the inert gas flow opening to the nozzle used for arc welding, both the temperature and the flow speed of the gas increased significantly. At these higher temperatures and flow rate, the resulting arc was found to cut the materials, rather than weld them together.

Based on this discovery, the first commercial plasma cutters were introduced in the early 1960’s. Plasma cutters can be used to cut all metals, including stainless steel. Early plasma cutters needed an initial direct contact between the torch and the cutting material to create an electric arc between them.

A simplified description is as follows: The power supply and the arc starting circuit are used to generate a high frequency electric arc between the electrode and the nozzle. Additional current from the power supply increases the size of this arc, and gas flow through the torch pushes this arc out of the nozzle orifice. This is the pilot arc.

When the pilot arc touches the work piece (the metal being cut) the positive pole of the arc, which was attached to the nozzle “transfers” to the work piece.,  Gas flow and the amperage of the current flowing through the arc are increased to form the plasma cutting arc. Current flows through this arc between the electrode and the cutting material.

The power supply ensures that enough energy is provided to maintain the plasma arc. The swirling plasma gas that remains un-ionized forms a sleeve around the arc as they exit the nozzle orifice This sleeve of cool un-ionized gas is the primary shaper of the cutting arc. The secondary (shield) gas further constricts the cutting arc as it passes through the shield orifice. The high temperature of the plasma arc melts the material.  The high velocity of the gas flow removes the molten material from the cut.

As soon as the arc begins to melt the cutting material, torch motion is initiated, and the programmed cutting route is followed. Over the years, many variations of plasma cutting machines have been introduced to the market, include the following:

Plasma Cutting is one of the most versatile and low cost methods to cut stainless steel. And, by utilizing Penn Stainless for your plasma processing, you achieve many additional benefits as compared to using plasma processing options generally available. Still, before selecting this process, it is important to consider many factors, including tolerance requirements, material size and thickness, desired edge quality, lead time, and also any additional processing that will occur after the cutting step.

In order to accurately determine the true cost of cutting when comparing processing options, it is important to consider the following:

As compared to laser, waterjet and saw cutting, the cost of the plasma cutting process itself is quite inexpensive.

As compared to laser, waterjet, and saw cutting, in most cases plasma cutting will require greater material usage. In order to accurately determine this, it is important to consider extra material that may need to be purchased to account for material that needs to be removed in secondary operations following the cutting process, kerf loss and skeleton loss.

When determining the economics of choosing plasma cutting, it is important to consider the cost of additional processing steps that may be utilized.

Huge selection of plate and sheet inventory, including large sizes and over 30 grades are available.  By offering extensive inventory and large size and thick gauge plate cutting capability, Penn Stainless Products is uniquely positioned to provide cost and time savings opportunities to the end user customer as compared to other service centers.

Penn Stainless Products has 30 years of processing experience to help customers select the most cost effective processing options that best meet their needs.